Brian Jennings is a sculptor and composer who has lived and worked in Stratford his entire life. Born in 1937, he started playing piano in the late 1940s and has several of his compositions listed in the Library of Congress, including “Refrains of Childhood Not Forgotten.” He has recorded two CDs, “Reverie” and “Reflections.”

In the last decade, he has taken up sculpture after taking classes at the Creative Arts Workshop. He works primarily in marble, in the neoclassical style. He’s lived at his home on Academy Hill since 1971.

CAGCT: Why did you choose to sculpt images of your family?

BJ: I don’t know. I suppose I know them better than anyone else. And I love little children. My mother didn’t like this image of herself. It made her look older than she was. It wasn’t very complimentary. It was really more a commentary on aging. She does have more wrinkles here than she deserves.

CAGCT: What did you do before you took up art full-time?

BJ: I worked for Oronoque Orchards for 21 years. I made the pie dough, which they shipped all around the country. They wanted me to be a manager, you know, to do things like figure out how much shortening to order and such, but I said no. I was too creative for that. It was hard work too.

CAGCT: What are you working on right now?

BJ: I’ve got my typing that is keeping me busy. I’ve been writing like a fiend. I write in dialogues – you know, Platonic dialogues? It’s on any subject I happen to think of – death, God, time – but all in dialogues. I’ve got hundreds of pages of it.

CAGCT: Your family is all musical. Your father, George Lawyer Jennings, played the cello for the New Haven Symphony, and your grandmother, Katherine Jennings, played the trombone and the piano. Your sons record and teach music at the Acoustic Refuge in Easton. Now you’ve been working on writing and sculpting these past few years. Do you feel these creative outlets are all linked for you?

BJ: I don’t know if they are linked. They are all parts of my nature, I suppose.

CAGCT: You lost your wife, Barbara Jennings, a painter, several years back. You still have many of her paintings. Do want to keep her works, or share them, perhaps sell them?

BJ: I did give away some of them. I didn’t like to surrender any of them, even the ones on the walls. Here you can see these still have price tags on them.

CAGCT: You’ve got quite an extensive set of gym equipment in your basement. What is the story? 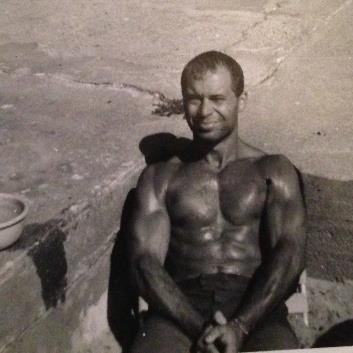 BJ: When I was five years old, I had a ruptured appendix. I almost died. I can still see an image of myself taken away in the front yard on a stretcher. It’s always stuck with me. I think ever since then, since my recovery, I got interested in keeping fit.

I’m a great believer in inversion. I read somewhere once that the creatures that live the longest lives are the ones that have their heads lower than their bodies. So on any given day you might come by and I’ll be hanging around upside down.

Picasso said: ‘Youth has no age.’ And I believe that. Whoever said it was a good for you to age is wrong. I see these guys who retire and they sit around and get a big stomach. The older you are the more interests you need.

I did it naturally. The day is not long enough for everything I want to do. So many people are bored. I am never bored.
—
Brian Jennings’ phone number is probably listed in the White Pages. Or you may be lucky to meet him in person at a Guild meeting. He is not online (except here).